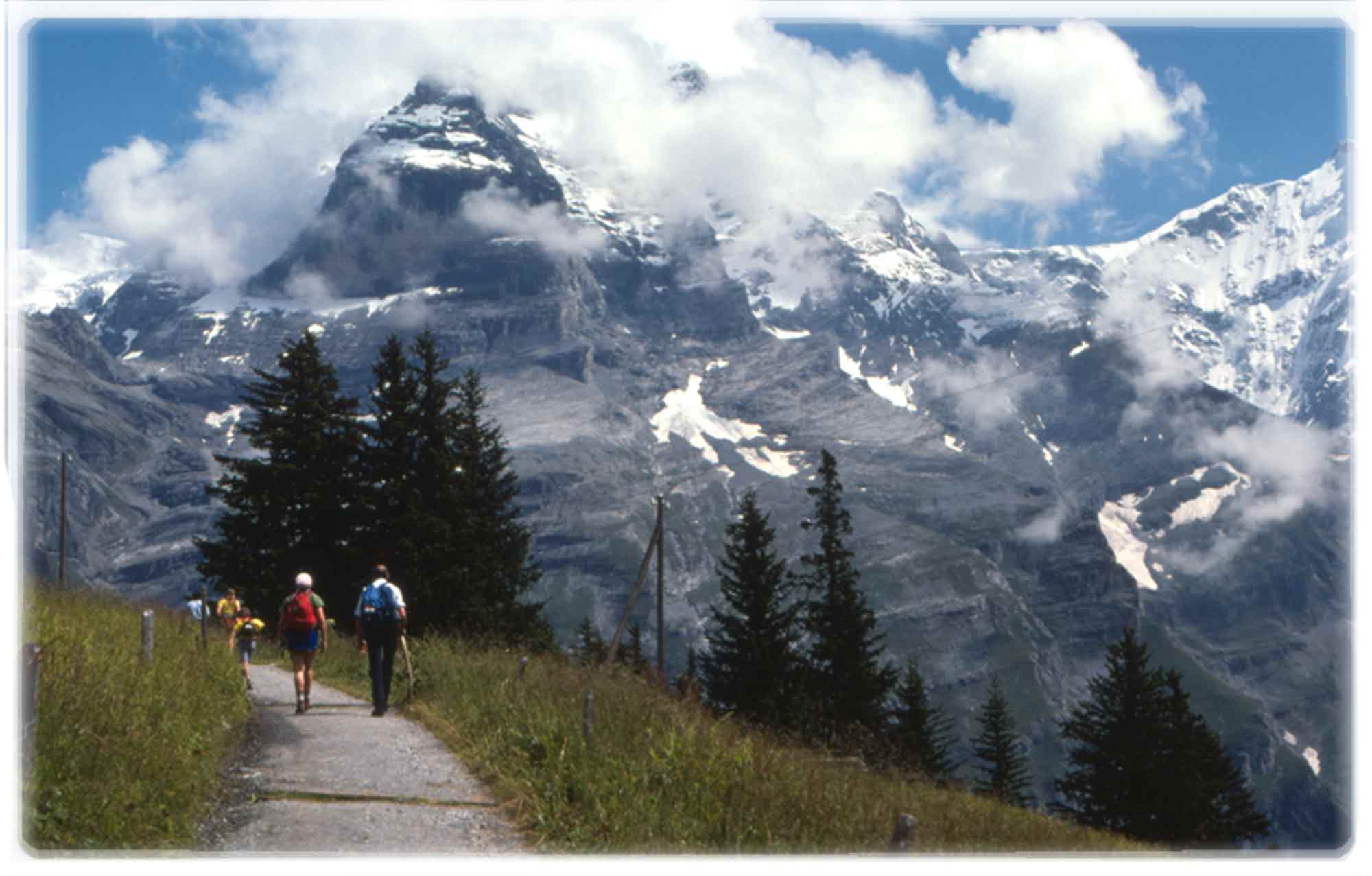 Gimmelwald is a tiny village tucked away on a mountain side in Switzerland at the far end of a long and rather narrow valley with majestic waterfalls throwing themselves down sheer cliffs hundreds of feet. You get to the village with a gondola lift. I got there on a rainy afternoon in 1977, quickly trudging from the gondola station over to the Youth Hostel, not quite knowing what to expect. My plan was actually to just spend nights here and go down in the valley each day to explore.

A couple days later I hadn’t left the Youth Hostel other than for walks along the mountain side the entire village clung to so precariously. It was my final day there, and it dawned with sunshine and blue skies. Time for a longer hike. Several of us — a guy from the Bronx, a gal from Australia, another from Canada, a gal and guy from the US – decided to do a day hike. The Swiss are very thorough and there were plenty of foot paths, neatly paved with asphalt. We picked one that meandered up the mountain side, wondering what was up there, beyond the trees, where the mountain met the sky.

At first, the trek was easy, although ever strongly going uphill. The village was already far below. We got to a point where we all stopped. Ahead of us was a mountainside that looked like someone took a giant scoop and just took a big chunk of the mountain away. We all decided that was not the way to proceed, as none of us fancied falling down in that abyss. So we headed back, but higher than the path we’d followed coming here. Eventually we’d hit the paved path going up the hillside. After a long while finding our way along this steep incline among a covering of pine trees, we stopped again. Ahead of us was a ravine, and quite a ways below a mountain brook where the water rushed ever downward. I was sure I’d seen the end of this brook in the gondola on the way up: Water cascading out over a cliff edge, to land a couple hundred feet lower, on the valley floor. None of us wanted to follow that brook to closely.

So again we turned and inched our way back in the direction we’d come from, but again, a little higher, looking for a safe place to make some vertical headway to find the path again.

We came to a small clearing. I stood in grass on a slope of about 45°, looking at a sheer wall of rock that was about 10 feet high. Beyond that was more trees. We needed to get up there. I figured if I fell down climbing this rock face, the trees below would catch me after I’d rolled maybe a hundred feet down the slope. Not an encouraging prospect. But we all agreed that going back down was not an option. It was just too steep and dangerous. So like a bunch of knuckleheads, we climbed the wall of rock. I wasn’t dressed or trained for this. I wasn’t even wearing hiking boots, but rather sandals. And I had a shoulder bag with 20 lbs of camera gear to balance. But there were cracks and outcroppings and grass to grab on to. So I climbed, trying not to look down.

I remember thinking how insanely stupid it would be if this was the end, if I fell and died here. I wasn’t even sure how my family would ever find out. I was train hiking and they didn’t even know what country I was in this week. The whole thing seemed so absurd: Surely this couldn’t be it. I just couldn’t die here, on this rock precipice in Switzerland, on a day with infinitely clear blue skies and snow covered mountains all around. It didn’t make sense. There had to be more. This wasn’t it for life. It couldn’t be. It’d be all so stupid if it was. I could feel my feet slipping on the rocks and my fingers scratched for a grip. The climb seemed to take an eternity, but in reality I’m sure it was only a couple minutes. I prayed. I climbed. I didn’t look down — I have a fear of heights. Then there was a hand from one of the others who was ahead and I crawled up onto the tiniest of mountain meadows. I helped the others behind me get up and pretty soon we were sitting there, enjoying a truly magnificent view of the treetops below us and on the other side of the valley (that we couldn’t see the bottom of) was the Eiger and the Jungfrau and a range of other mountain peaks.

After resting a bit, we headed up the mountain side again and before too long, the slope became less steep and all of a sudden, there it was among the trees: a paved path. We followed it up to a high meadow and of all things a restaurant. Obviously there was an easier way up the mountain. The rest of the day we spent wandering paved paths among pastures with Swiss cows in them and enjoying the view from the top of Europe.

I learned a lesson that day that I’ve never forgotten. In fact, I use a photo I shot that day as my screen saver to remind me: Life is precious and can change in a minute. It’s not just about me. What I do has an effect on others, even when I don’t plan to. I decided that day that I wanted to do things with my life that would benefit others, while using the skills God has given me, each day that I have. And it’s no coincidence that I’ve spent most of my working life doing things that improve the lives of others. Anything else would be a waste of a precious gift that is very fragile.

That’s also how I approach building websites for clients: I don’t want to just create a website. Lots of people can do that. I want to create an online presence for my client that makes them successful and improves their life and the lives of their clients. 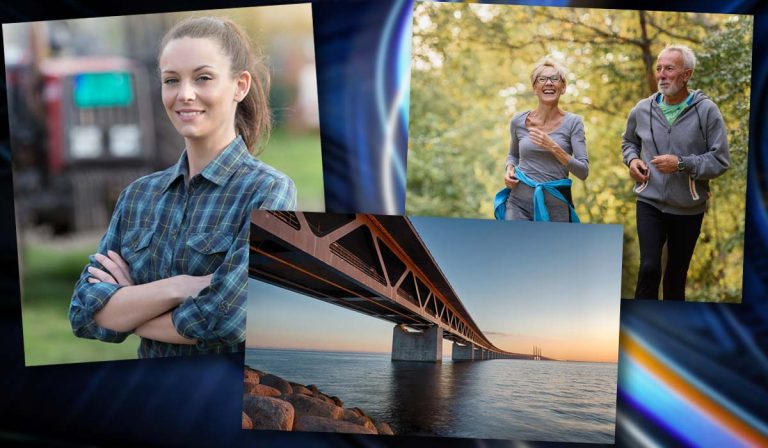 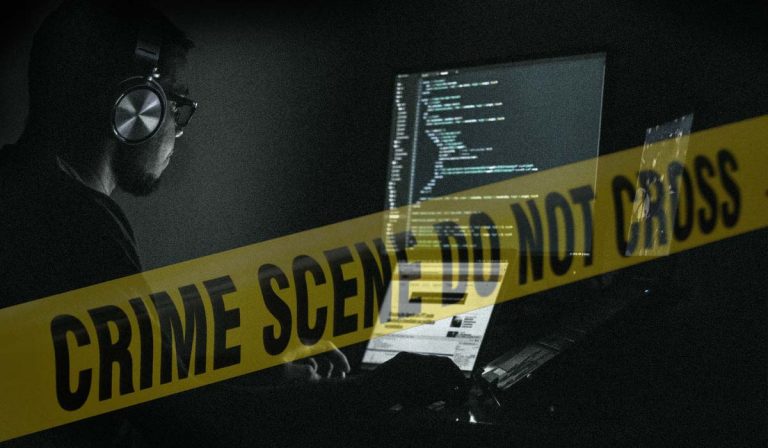 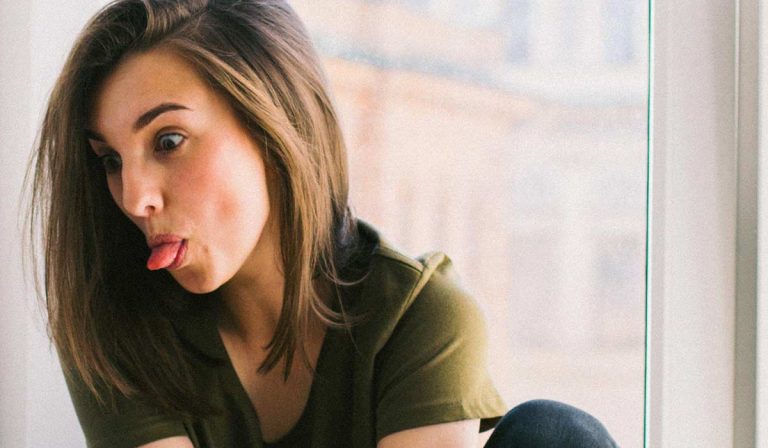 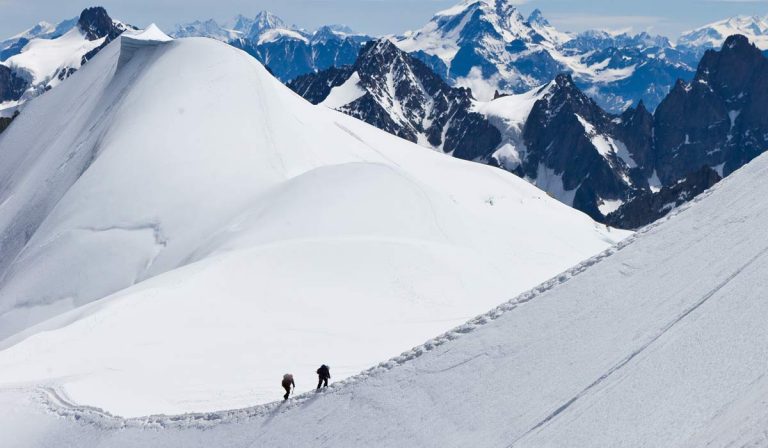 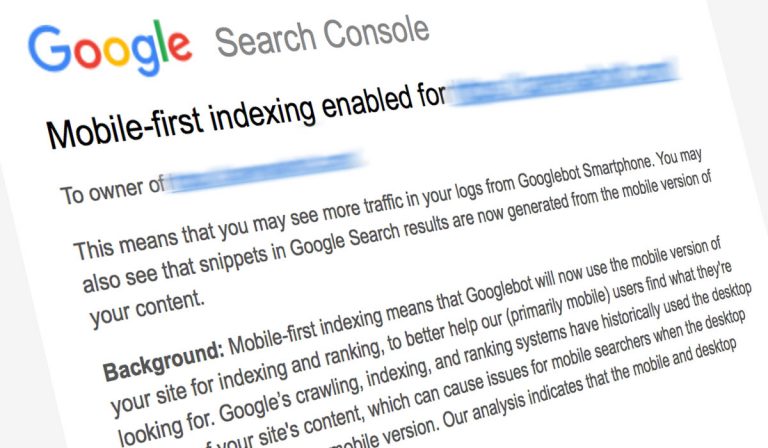 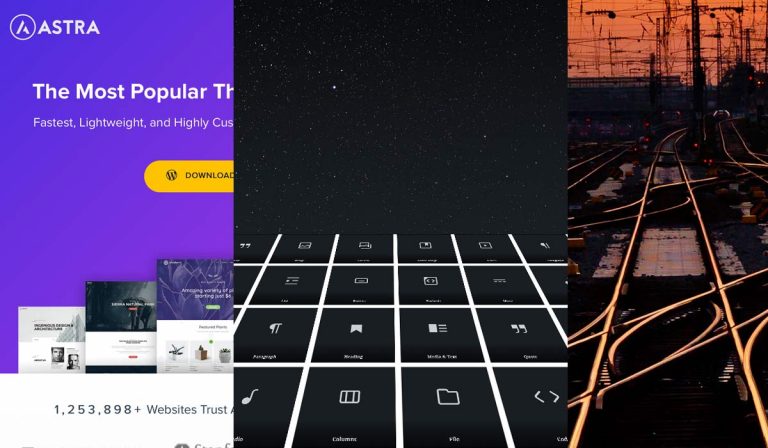